WOW, its all I can say.  The NA3HL coaches and owners are stooping to new all time lows when it comes to recruiting.

I mean all is fair in recruiting when you are telling the truth.  Got some dirt on a team or a coach and you want to use it, then go ahead if that’s your thing.  Some guys do it, most don’t because it usually backfires, but it is what it is.

But some NA3HL teams are now sinking to all time low recruiting tactics in order to save their own asses.

Not too long ago, NAHL people started spreading the rumor that if you didn’t play in a USA Hockey sanctioned program that USA Hockey was going to suspend you.  So lets clear that up right now.

USA Hockey isn’t suspending anyone and doesn’t give two shits if you play in one of their leagues or in another league.  See USA Hockey cant make that rule without having to deal with some serious lawsuits.  Its a complete lie.

Now, NA3HL coaches and recruiters are taking that lie further in some cases.  Making completely false statements like: 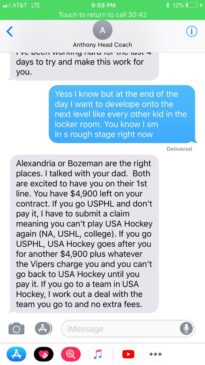 Yes.  You read that complete lie correctly.  Anthony, an NA3HL coach is telling a player that he has to “submit a claim” meaning the player can not play USA Hockey again!!!! Are you freaking kidding me!!!!!

Oh and in case you didn’t notice he says the kid cant play in college either!

So lets be clear Anthony, and all you other shit bag NA3HL coaches spreading this bullshit lie.  We are putting you on notice that we will publish your names when we catch you now.

Anthony Langevin Binghamton Junior Senators Owner and Head Coach.  You are a liar, and you are now exposed.

Hey Anthony, you moron, in case you forgot your hockey for dummies book, college hockey has nothing to do with USA Hockey.  Or didn’t you learn that in your remedial coaching clinics?

So, hey everyone send us your stupid and outlandish claims that coaches are making.  We will either clear them as truthful or we will expose these shit heads for what they are.

What kind of team and league needs to sink to these levels?  Just the worst league in North America.