Over five days, from Thursday, Sept. 22, through Monday, Sept. 26, all of the Southeast and Florida Division teams gathered – alongside four additional teams from three other divisions – and got a good read on which teams might just be the power-brokers. The whole scene took place at Chilled Ponds Ice Sports Complex in Chesapeake, Va., home of the Hampton Roads Whalers and site of the 2021 USPHL National Championships. 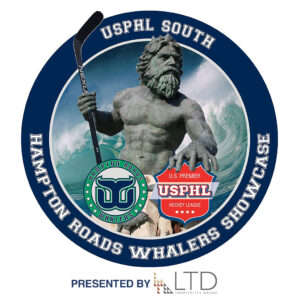 Many of the recent Nationals staples fared best, re-establishing themselves in a whole new season as the kings of their respective hills. Each team played four games against non-divisional opponents. Below, we take a look at the teams that came out of the weekend with at least a .500 record.

Well, they’re 7-0 overall, so it stands to reason that the Rush swept the event held in the same building where they won the 2021 National Championship. Playing in the second of two clusters of teams, they started with a marquee Saturday night matchup against the Florida Eels – a rematch of the aforementioned 2021 title game. The Rush yielded a point to the Eels (one of two they would cede this past weekend, without losing any of their own) with a 4-3 overtime victory. Aidan Quinn stood tall with the GWG.

After a 6-0 win over the Hershey Cubs on Sunday, they finished that day with a 6-4 victory against the Palm Beach Typhoon. Their final game was Monday against the Tampa Bay Juniors, who they also beat 4-3 in overtime off a Shane Adler OT game-winner. Hunter Berry has scored in every game this year and went 2-4-6 at the showcase and Swiss import Livio Azevedo posted 1-5-6 in scoring in every game.

The top two USPHL teams in points – the Rush and the Generals – came out of the five-day event clean. The Generals had an even cleaner time than their Charlotte rivals, coming no closer than three goals ahead of their opponents. They started out with a 6-1 victory over the Atlanta MadHatters, followed by a 7-2 defeat of the Midwest East Division’s Motor City Gamblers. AFter a 7-0 Friday evening victory over the first-year Columbia Infantry, the Generals ended with a 4-1 defeat of the Florida Jr. Blades. Richmond leads the league in offense with 47 total goals, and just a fraction short of six goals per game on average. Jack McCandless (2-4-6), Garrett McCabe (1-4-5) and Matthew Hamacher (4-1-5) all registered points in each of the four games.

The Eels started out with the aforementioned Saturday Night Main Event of the Rush vs. Eels 2021 National Final rematch. They also got right back into OT on Sunday against the Great Lakes Division’s Columbus Mavericks, giving that team their only point for the weekend. Veteran Eel Damon Kiyawasew sank the GWG in the 5-4 victory that saw the Eels go down 1-0 early. The Eels took a 4-2 win over the first-year Nashville Spartans and closed Monday with a 4-1 win against the Carolina Jr. Hurricanes. Another veteran Eel, Collin Patterson, scored a goal in each game and added an assist. At 6-0-1-0, the Eels remain undefeated in regulation and sit atop the Florida Division standings.

This was the weekend the Jr. Canes needed, as it helped push them back above .500 on the early season. Arriving on Saturday, they defeated the Tampa Bay Juniors that night 3-1, followed the next morning by a close 3-2 defeat of the Palm Beach Typhoon, their first come-from-behind victory of the season.

They pushed past the Mid-Atlantic Division’s Hershey Cubs by a 9-4 score but in their final game – and the final game of the showcase on Monday afternoon – they fell 4-1 to the Florida Eels (the same organization they met in the 2021 National semifinals, also in Chesapeake). Zach Nicholls came out of the event with points in every game, putting up a 2-3-5 for the weekend.

The hosts started out on the wrong foot a bit with a 4-0 shutout loss to the Florida Jr. Blades. From there, it all looked up as the Whalers finished strong going 3-0 the rest of the way. They beat the Columbia Infantry, 5-2, had an offensive burst against the Motor City Gamblers in a shutout win and then closed out on Saturday with a 6-1 victory over the Atlanta MadHatters. They gave up just three goals in their final three games total, thanks in large part to efforts such as goaltender Jack Nowicki stopping 51 of 54 shots in his two wins.

Playing in the first group of teams that started on Thursday, the Blades kicked off their showcase run with a 4-0 victory over the host Hampton Roads Whalers. Sal Carabelli stopped 23 saves in a game where the Jr. Blades were outshot but persevered with the W. They were outshot yet again (and were down 1-0) versus Potomac on Friday, but came back to win 4-3. After a clear shutout victory against the Wooster Oilers later on Friday, the Jr. Blades were in action Saturday morning against the Richmond Generals, who came away with the 4-1 victory. Ironically, this was a game in which the Blades held a 1-0 early lead.

The Patriots kicked their showcase run off with a decisive shutout win over the Wooster Oilers, but were unable to make it two in a row (as of yet), when the Jr. Blades handed them a 3-2 loss on Friday. Right back into action later that day, the Patriots defeated the Atlanta MadHatters by a 4-2 score. Saturday saw the Patriots close their showcase with a big offensive showing against the Motor City Hockey Club. Newcomer Oscar Sjolander was the only Patriot to score in all four games, posting a 3-4-7 line in the Southeast Showcase.

The Juniors started out Saturday with a 4-1 loss to the Carolina Jr. Hurricanes, but returned Sunday with a 1-0 shutout victory over the Nashville Spartans. Onni Taskila stopped 19 shots. After a 3-1 win on Sunday night against Columbus, they finished with a 4-3 overtime loss to the Charlotte Rush.

The first-year Spartans enjoyed making some history with their first two victories in the USPHL Premier. It came late on Saturday night, when they defeated the Columbus Mavericks, 3-2. A.J. Benit scored the first game-winner in team history, and his goal was deemed so when the Mavericks scored their last within the final minute of the game, trying to force overtime. On Sunday morning, the Tampa Bay Juniors took the 1-0 shutout win against the Spartans, and then later in the day, it was a 4-2 defeat to the Florida Eels. Nashville bounced back Monday, however, defeating the Hershey Cubs by a 5-0 score, also clinching their first-ever shutout victory. D.J. Lyons had the win, and the team defense shared the credit by limiting the Cubs’ shots on goal to just 12.

The Typhoon saw one of the greatest comebacks potentially in recent USPHL history. Down 3-0 entering the third period to the Hershey Cubs, the Typhoon rattled off seven third period goals, fueled in part by two goals scored by Declan Stitt. Energized by this, the Typhoon held a 1-0 lead over the Carolina Jr. Hurricanes on Sunday morning, but eventually fell by a 3-2 score. The Typhoon played the Charlotte Rush close, coming out of the second down by just a 4-3 score. The Rush, however, closed it out with a 6-4 defeat of the Typhoon. Palm Beach closed their showcase stand with a bounceback 6-3 victory against Columbus.