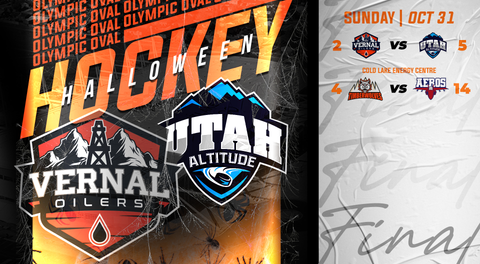 The Cold Lake Aeros jumping out to a high scoring start, and Utah Altitude drawing first blood against their in-state rival were among multiple headlines that surround the 2021-2022 season opening weekend.

The WSHL opened with five games of which the Cold Lake Aeros claimed the bulk of the schedule with three games, and maintaining an unblemished 3-0 start to their campaign.

The Edmonton Eagles and Hinton Timberwolves come up short in both of their games this weekend; Vernal drops its only match, but return to action tomorrow.

The Edmonton Eagles had the tall order of opening their first ever campaign against the returning Thorne Cup Semi Finalists, Cold Lake Aeros.

The Eagles got off to the perfect start in scoring the first goal of the 2021-2022 season after Riley Auigbelle scored at 16:00 of the first period. Edmonton wasn’t able to find a spark from the opening goal especially after conceding about a minute later to Nathan Stevens.

The Aeros put a lid on the efforts of the road team with a goal by Josh McVeigh midway through the second period; eventually pouring it on with three goals in the third.

Stevens led all skaters in points with 2G-1A-3P while Kyle Avery and Esa Patton each picked up a couple helpers.

Jaxon Taylor was beat only once making 14 saves

The Barrhead Bombers wanted to have the same type of performance they showed when they last faced the Hinton Timberwolves to close the 2020-2021 regular season.

Well they certainly did. The Bombers secured a four goal lead before a Timberwolves late-game rally chipped away at their lead. Grey-Carifelle took home a pair of goals including the first one for the Bombers’ season at 18:13 of the first.

The Timberwolves were able to get one past Barrhead’s net minder Bencsik midway through the second period on an even strength goal by Lars Granstrom. The two clubs exchanged goals in the latter half of the third, but it was too late when the Timberwolves found consecutive scoring efforts.

A three goal opening frame by the Aeros was the staple of this game as the Eagles found the back of the net only twice. Three different players scored for Cold Lake to get the 3-0 score including Colten Deneron, Stephen Mosgopolous and Esa Patton.

Cold Lake added one more in the first minute of the second period to make it 5-0 on a shorthanded goal by Dylan Bauer. Edmonton found some traction with a quick response at 18:11 but failed to build on Shayle Ducharme’s power play goal.

The game would fall to 4-on-4 when Cold Lake started on three unanswered scores before eventually both teams finding shorthanded goals by Kyle Avery and Tyrell Shott respectively.

Brody Hsiao posted 22 saves for the Aeros to ensure the victory.

Coverage and stats are TBD for all games at the Olympic Oval during Oct. 31 – Nov. 2

It was a grim night for the Hinton Timberwolves because normally a four goal game would mean a good thing. Marian Pazitka’s two goals could not inspire a Timberwolves team against the overwhelming Aeros offense.

The Cold Lake Aeros continued to tear through the weekend with a 14 goal outing on Halloween. Nathan Stevens scored a hat-trick plus three apples; Three other Aeros also had six point nights to carry the team.

Nathan Prouix and Jaxon Taylor shared the net combining for 22 saves—Prouix making 14 of those saves.

GOJHL Applies For Junior ‘A’ Classification