All games in the state of Washington were cancelled over the weekend due to an abundance of concern, and to comply with State Government Officials/Medical Official requests regarding the outbreak of COVID-19 (Coronavirus).

Cold Lake Hornets had the Hinton Timberwolves along the ropes for a great portion of the match, but was not able to capitalize on three different leads. Hinton’s herculean third period lifted them over the visiting Hornets maintaining a 9-1 season series finish.

Yauheni Lavrov and Anson Smith tied with four points, and were pivotal for Cold Lake’s effort as Lavrov netted a hat trick and Smith registered four helpers in the night. Max Sturko got the go-ahead goal making it 8-7 for Hinton at 7:27 of the third period. They went on to complete six unanswered goals when Jamahl Eakett buried an insurance goal with under a minute remaining.

Hinton was in the rally position since Cold Lake strung together three straight tallies in the second frame including a short handed nod that gave Lavrov his hat trick at 9:11. It all came together for the Hornets in the first period. Despite conceding the opening goal, they were able to galvanize a counter attack to give them their first lead at 17:35 of the first.

Riley Tucker had a strong game for Cold Lake and wanted a second win against the division runner-ups. He made 51 saves in a game that saw his team vastly outshot.

Oleksandr Davydenko’s overtime winner made the upcoming playoff series between these clubs that much more interesting.

Barrhead Bombers were finally able to pick out the Hinton-sized thorn in their spine when they beat the Timberwolves for the first time this season. The victory serves as a major catalyst in confidence and momentum going into their Provincial Division Semi-Final series.

Although they started with a two-goal lead, the Bombers had to come from behind to force the upset victory. Raf Lambert Dodginghorse and Dmitro Kobylnyk put the Bombers up 2-0 before the Timberwolves found a spark. A pair of goals from Talon Thomas provided the resurgence Hinton needed before Brendan Auger took the lead 3-2 with 17-seconds left in the middle period.

Stran Backfat Redcrow along with Yoshtin Gunner kept the Bombers in the game as they connected in the third period to send it to overtime.

Brock Machholz, who joined the Bombers 10 games ago, has made a noticeable impact in the goaltending facet. He wins his second consecutive games after making 43 saves in this match.

Edson Aeros officially ends its regular-season on a perfect note with an unblemished 23-0-0 home record, and first in the division with an overall 44-3-0 mark. The weekend indicates nothing short of what the Aeros are used to, that being a huge expectation to win.

They will face the Cold Lake Hornets in the Provincial Division Semi-Final series after skating past them 7-2 this weekend. Unlike in its game against Hinton, the Hornets just weren’t there against the skilled Edson roster. Six different players for the division leaders found goals. Antoine St-Onge led with two goals and Niklas Froden tied in points with a goal and two helpers.

Froden’s only goal of the night triggered a six-goal burst by the Aeros that capped off at 8:28 of the second frame. Yauheni Lavrov and Wassim Saidani managed back-to-back goals but the hump was insurmountable. The Hornets were not able to defeat the Aeros in regular-season but will have a chance to do so in playoffs going into Repsol Place for three games.

The Avalanche rolled through Valencia; so did Gabel Longshore, Mark Kurliandchyk, and Nicholas Abernathy who each scored hat tricks over the monstrous weekend at Valencia Ice Station. Flyers weren’t able to secure a last effort win and finish the season on a 26-game skid.

Ontario was able to secure first period leads in both games, but the Flyers had an answer to their initial lead in Game 1. Kyle Wilson got on the board twice for Valencia; his first goal cut the Ontario lead to 2-1 at 11:52 of the second period. The Avalanche would then ignite for five straight goals. Eventually, Wilson found his second of the night at 7:26 of the third, but by then the deficit was at six goals.

Ontario started on a 5-0 lead in Game 2 as Abernathy and Kurliandchyk found their first of the night. Overall, they were responsible for six of the 10 goals scored due to their dueling hat tricks. 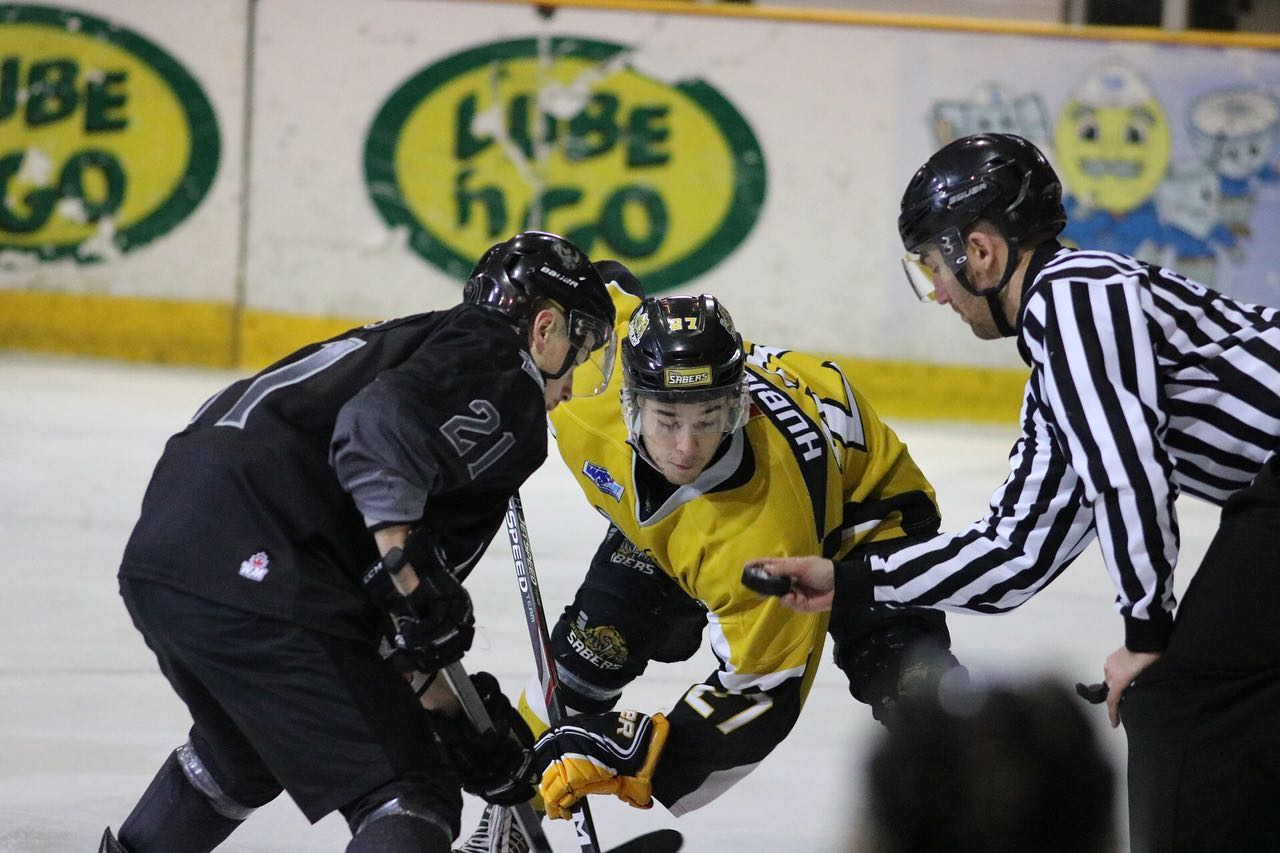 San Diego Sabers suffered the same fate it did three years ago when it last played the Rhinos in El Paso. El Paso was able to expose a tired Sabers team after travel, but remained just as imposing over the course of the weekend. The Texas side ends its regular-season with an impressive 23-1-1 record and 43-4-2 overall mark.

17 players registered points for the Rhinos in the shutout effort as Marcus Ohlsson-Ornelius, Filip Nordin, Sebastian Jovicic, Niklas Ornmarker, and Jacob Robinson all had at least four points.

San Diego didn’t generate much opportunity in the same game only forcing Oliver Soovik to make 10 saves for his sixth shutout of the season.

San Diego didn’t miss the opportunity to get on the board on Saturday and Sunday, although it still wasn’t enough to fluster the defending champs. A goal from Joel Rothman with seconds left in the first period of Game 2, evened the score 1-1 on Saturday. Rothman beat Sawyer Schmidt on the power play but then the Rhinos geared up for three straight tallies including two from Ornmarker.

Jakub Rusina found San Diego’s second and final goal of Saturday’s game also on the man advantage. But it was Sunday’s tilt that really told how these teams compared. In a fatigued third game of the weekend, El Paso was able to manage a 4-0 lead before Cole Rorick could score for the Sabers at 17:17 of the second. A pair of goals in the second and third periods reached the 8-1 final.

Pueblo Bulls earned themselves three more dates against their in-state rivals, in the playoffs, after successfully collecting nine points against Wichita, and overtaking Dallas in the standings for third place.

Bulls met very little resistance in a weekend that saw them score 35 goals in three games. Wichita provided some pushback only on Saturday when they found two responses to a pair of Bulls goals in the first period.

Ondrej Blaha collected 16-points including a hat trick on Sunday and two, seven point games. But ultimately, Pueblo was finding contribution from 10+ skaters on each night.

Division leaders, Fresno Monsters, finished off the Las Vegas Thunderbirds in two games at Gateway Ice Center. Monsters move to seven straight wins heading into the postseason. Though the Monsters took control of the season-series in the latter half of the season, Las Vegas’ strong start to 2019-2020 gives them the edge at 5-4.

Narek Aleksanyan registered six-points in two games including four helpers on Saturday. Aleksanyan is the first Monsters to reach 100-points this season. Zackory Turpin, who also had four points on Satuday, finished the regular season with 92-points, second in scoring among the roster.

Fresno was able to take advantage of multiple goal leads and didn’t falter once after starting on 4-0 leads both nights. Anton Svensson and Ty Woodard opened the scoring on Friday and Saturday respectively.

On the other hand, Joseph Terrana and Linus Lomander denied Sebastian Nilsson a shutout on both nights being the only goal getters for the T-Birds.

*Due to recent developments regarding COVID-19 (Coronavirus) in the State of Washington, Ogden and Utah will face each other in the Northwest Division Championship.

Ogden Mustangs earned a pair of confidence boosting wins over their in-state rival, Utah Outliers, as the Mustangs had to hold on for the win on Friday, and fight for the win on Saturday. This was Ogden’s biggest test since dropping three straight shortly after the Showcase.

An early goal from leading scorer, Shane Gilbert, at 14:42 of the first period stood as the game-winner on Friday. Ogden’s netminder, Travis Allen, had little work in the first, but his load picked up in the second and third. He made a total of 23 saves to earn his third shutout of the season, beating league shutout leader, Oscar Wahlgren, who made 36/37 stops.

It was a different animal on Saturday all together. The same goalies, Wahlgren and Allen, got the start but they weren’t as impermeable as they were the night before.

What was an initial 3-1 lead for Ogden, quickly turned to a level match when the Outliers closed out the second period on a pair of goals to render the game 3-3 at 3:58. Mustangs’ second leading scorer, Bryson Bartell, scored a late game-winning goal with under two-minutes followed by an insurance goal from Stanislav Dosek to make it 5-3.

Northern Colorado’s safety net lied in the nine possible points they had to work for against Oklahoma City Blazers at the Arctic Edge Arena. Eagles picked up eight of nine points as they only needed two points to stay in the clear of a buzzing Pueblo Bulls squad.

As mentioned, the Eagles will remain in second place of the Midwest-Mountain Division and will face an already bitter rival in the Pueblo Bulls for the first round of divisional playoffs.

The Eagles were welcomed to Oklahoma City with three goals including an unassisted tally from John Stevens to open the scoring at 16: 20 of the first period. The Blazers accomplished what it needed to do, and then some, when they scored three unanswered, but one cannot simply stop a team on a mission.

Northern Colorado didn’t want to wait long and started on the comeback in the same first frame. Needless to say, the first period was saturated with goals after Jacob Elik and John Campbell brought it to 2-3 for the Eagles. Evan Wammes tied the game 3-3 deep into the third and Brennan McFarland put it home in overtime to seal a win on Friday.

McFarland turned out to be the only goal-getter of the game for both sides on Saturday. He scored at 16:10 of the second frame as Marshall Murphy moved on to his sixth shutout of the season after making 20 saves.

Sunday’s outing was nothing short of back and forth action with the Eagles finally claiming victory on its third lead of the night. Noah Henslee kept it close for the Blazers with his two, second period goals, especially when he tied it a second time at 8:23 of the second.

But Jacob Elik wanted the sweep and decided on Northern Colorado’s third goal of the night at 15:49 of the final period.